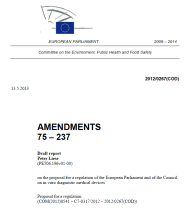 As promised, here is an analysis of the IVD amendments further to the report provided by rapporteur Liese, with numbers 75-237 and 238-399. Not that as many as the medical devices ones, but still a lot – and no less complex.

I won’t repeat all the procedural proposals that are both in the medical devices regulation proposal and the IVD regulation proposal (like UDI); please see the medical devices regulation proposal and my discussion of that proposal in that respect. I have tried to group them into categories as much as possible. I’m not at all sure that this blog gives a comprehensive view of all amendments, it’s intended to provide an overview of the points that I considered especially important with the interest of my clients in mind, which are mainly industry (manufacturers, ranging for SME to multinational).

As you will see, an important part of the amendments concerns home brew devices and genetic testing. Home brews obviously feature because this is an important item for industry that has a longstanding and complex love/hate relationship with the subject. Genetic testing, but also self-testing, is being subjected to additional counseling and consent controls that I don’t believe will achieve the policy goals aimed for. It breathes a not too rational fear of the unknown.

As mentioned, ENVI will discuss the amendments among themselves on the 29th of May and vote on them on 10 July.

ENVI discusses these amendments and the medical devices ones tomorrow and votes on them on 10 July. Do you see anything that doesn’t make sense or is just plain bananas like the PMA system proposed? You can still influence the discussion. Contact a parliamentarian from the ENVI committee and tell them what you think, preferably contact the ones that have put their name to amendments (which you can see in the amendments that I linked to). Together we have a lot to lose as a result of ineffective legislation. I would truly hope that there are more people with an opinion in these matters.

And Mrs Roth-Behrendt and others in ENVI – in case you think I am in the pocket of the industry please think again: several members of my family depend on medical technology for their LIFE. This dossier is not a game for them. I want the best technology available to them as quickly as possible, not the least innovative and that too much delayed. I want it for myself too when the time comes, because we’ll be working with this legislation for decades to come. That is more important to me than anything else in the world. With these proposals you will not deliver on your promises, regardless of what you say in hearings. It’s time to ditch the fact free politics.