MedTech Forum 2012: “S is for scrutiny, which we’re not sure about” 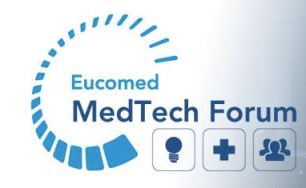 “S is for scrutiny, which we’re not sure about”, that would be more or less the take home message of the MedTech Forum in Brussels that I attended last week from Wednesday to Friday. This conference is an ideal moment to take stock of the EU medtech industry. No wonder that everyone was there to discuss the newly proposed medical devices and in vitro diagnostics regulations. If you want a summary report of the plenary sessions, a good picture emerges from the tweets on the hashtag #mtf2012 by @meddevlegal (that’s me), @clinicamedtech, @emdt_editor and @maxwellmedtech between 10 and 12 October 2012. The picture that emerges is that the industry welcomes the new rules in general, thinks some details must be clarified and is worried about what the proposed scrutiny procedure will look like after it has gone through the legislative procedure and the Parliament has had its way with the proposal.

As I promised, I would write more on the specifics of the newly proposed medical devices regulation. Scrutiny is a nice one to start with but it will be a very much moving target during the legislative process. For those not following the discussion closely, scrutiny is the newly proposed procedure that allows the new MDCG to call up files from Notified Bodies for class III devices and possibly others to look at in detail and provide the Notified Body with feedback.

My prediction is that the industry will do its best to clarify the procedure by lobbying amendments and the Europan Parliament will have to make up its mind if it thinks the procedure is strict enough to appease the consumers, patients and other interest groups, even if their arguments mostly show little or no understanding of the current devices legal system. But that’s politics for you. Evidence based argumentation is sadly not a requirement. So the industry might be forced to deal with rules that require “Pre Market Assessment” based on the misconception that devices are regulated as toasters. A big surprise (at least for me) was that the ESC, historically one of the more vocal organisations beating the “devices are toasters” drum, has decided to wisen up in the mean time. Its representative said at the Forum that the ESC is not in favour of a PMA type system after all because of the detrimental effects on innovation and R&D. Too little, too late and thanks for helping to create all this confusion. I sincerely hope they will spend some time explaining their change of position to the EU Parliament’s ENVI Committee now that it seems to have gone ballistic on PMA and has painted itself into a corner on it politically. As you will see below, there are lots of political considerations that found their way into the proposal with respect to the scrutiny procedure.

Some of the reactions at the MedTech Forum were quite telling. As I have written, member states are actually not a big fan of a new PMA type process. They simply have no resources or expertise to staff it. The Irish Medicines Board was even more vocal at the Forum. Its representative Pat O’Mahoney stated (paraphrased in my own words): PMA is already here, we do look at devices before they go to the market by means of the prior notified body control. PMA is a non-discussion.

Quite interesting were the Commission’s statements on the new proposal. The Commission, both Commissioner Dalli and high ranking DG SANCO official Mrs. Testori-Coggi reconfirmed that the PIP scandal had nothing to do with the quality of EU medical device law, but was a market surveillance issue. Pat O’Mahony mentioned that there will be steps on the Dalli market surveillance plan during the Irish Presidency at the end of January 2013, when a stakeholder meeting has been planned with the competent authorities and it will become clear what the authorities are working on behind the scene to improve market surveillance.

Another eyebrow raiser came from Commissioner Dalli himself. First, he said he was convinced that the proposal would be adopted before EU parliament elections in 2014. I hope so, because the Commission will also change in 2014 and a new Health commissioner may be less of a CE system champion than Mr. Dalli. Secondly he was very specific and adamant that delays caused by the scrutiny procedure would only amount to “days and not years”. As you will see from the below, I think that the procedure will need some additional work to make sure that this does not happen.

Now for some more details on scrutiny. The info pack for the Forum contained a nice fact sheet of Eucomed about the scrutiny procedure (also available on the website). It does a good job of giving a succinct graphic overview of the procedure as it is written out in article 44 of the proposal. 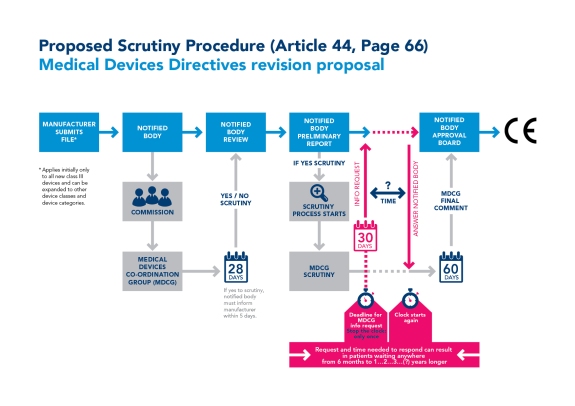 The Eucomed flow chart does however not take all potential permutations in the scrutiny procedure into account. It only looks at the delaying effects of an MDCG request for additional information, which is similar to the ‘clock stop’ that we know from other administrative procedure for e.g. medicinal products market access. I see at least two other permutations not taken into account in it. These concern the nature of the recommendation issued by the MDCG and the ‘due consideration’ that the Notified Body must give to it.

As to the first point, the text of the proposal does not exclude conditional recommendations, for example that the Notified Body should only issue the certificate after completion of additional clinical trails that may take years and cost millions (see the step “MDCG final comment” in the flow chart).

As to the second point, the clause “Subsequent requests for additional information from the MDCG shall not suspend the period for the submission of comments” opens up additional possibilities. Although these might not suspend the period that the MDCG has for submitting comments, they may of course cause the Notified Body to delay issuing the certificate if the MDCG has made it clear to the Notified Body that more comments will be forthcoming that the Notified Body might want to take into account. When asked during the Notified Body clinical session, BSi mentioned that its tactic would be to use its best efforts to implement ongoing dialogue with the authorities while still issuing the certificate as soon as possible, but this is no guarantee.

Other elements remain unclear as well. For example, what will the effect of a Notified Body not taking recommendations into account, because the Notified Body and MDCG have a scientific difference of opinion about, for example, whether additional clinical evidence is necessary for a certificate. That is not inconceivable as the real experts can make more money at a Notified Body than at the authorities and the authorities may lack expertise, so the experts at the authorities may be less expert an inclined to err on the side of being overly cautious. Actually this is a likely scenario because of all the controls on expertise of the respective actors built into the regulation proposal control on authority expertise is glaringly absent. What would happen if a Notified Body tells the MDCG off on scientifically unfounded recommendations? Since the monitoring of Notified Bodies becomes a MDCG affair under the new regulation, that committee may gang up on Notified Bodies that they don’t like and the notifying member state may threaten to pull the notification of the Notified Body does not  agree with the MDCG more. What is more, there is actually nothing in the proposal that prevents members from making this a condition for notification in the first place as Annex VI contains only minimum requirements. The Commission may even pose this as a condition later by means of delegated act.

Finally there is the gaping open end of the scope of the scrutiny procedure. The Commission may decide that other devices than class III may be covered by scrutiny for a predefined period. How long such a period may be the proposal does not say – it might be for as long as ‘necessary’ under the current text. Such measures may be justified only by one or more of the following criteria:

(a) the novelty of the device or of the technology on which it is based and the significant clinical or public health impact thereof;

(b) an adverse change in the risk-benefit profile of a specific category or group of devices due to scientifically valid health concerns in respect of components or source material or in respect of the impact on health in case of failure;

(c) an increased rate of serious incidents reported  in respect of a specific category or group of devices;

(e) public health concerns regarding a specific category or group of devices or the technology on which they are based.

All of these options seem to me more politically motivated than suited to actually solving the problem. For example (b), (c) and (e) will not be fixed by increasing scrutiny at market access but rather with beefing up market surveillance by the Member States. (d) is an accreditation and Notified Body supervision problem that the Member State authorities must deal with. But wait, what was the problem with all of the forementioned things again? Ah right, no resources at the Member State level. So we go for the cosmetic solution that we can sell politically. (a) seems motivated by Member States’ desire to have more control over the revolutionary and unknown. Again, a political rather than safety point. Why? This type of products benefits typically from the EU’s competitive advantage in bringing these products to the market quickly and safely, which is envied by other jurisdictions. Why sacrifice this if much more proportional measures can be taken, like beefed up post marketing clinical follow up and/or increased monitoring of its performance some time after market access (like under the EMA conditional access mechanism for medicinal products)? Oh wait – increased Member State monitoring means resources …

I am sure that more points will pop up with respect to the scrutiny procedure as we think about it more, and remember that the procedure itself will be a moving target due to the Parliament’s stake in it PMA discussion. So nothing definite yet, but a lot of food for thought.