I had the pleasure of presenting at the Informa Conference on the Medical Devices Directives and the Revision in Brussels today. An nice conference with a good overview of what is coming our way in terms of EU medical devices regulation 2.0 – or not.

My subject was the Eudamed database under the revision project – in other words what functions the currently existing Eudamed database will have under the new medical devices regulation (and I haven’t even looked at the IVD regulation, but it’s functions will be largely similar under that regulation so this presentation gives you a good mutatis mutandis overview for IVDs – even for the clinical part as IVDs will be subject to clinical investigation of their own (interventional clinical performance studies). 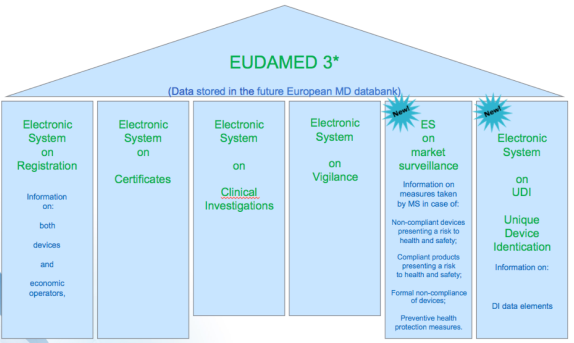 The Commission has clearly envisaged that the Eudamed database that provokes many a swear word in a multitude of languages from its current users because of its dubious speed and less than stellar usability, just to mention a few points, will become everything to everyone in its 3.0 version. The four existing pillars of the current Eudamed cathedral (as it is starting to be called) will be updated and two more will be added.

The Parliament threw in access to the database for basically everyone, as well as mandatory user friendly interface and a 7th pillar that is not in this picture for (special) notified bodies and certificates.

There is a lot more to it, which you can see in my below presentation at the conference:

But: will it be ever be built?

The question now is: will the Commission pull this off? I have heard very cynical remarks both off and on the record about this, and certainly made some of my own, given the speed with which Eudamed was developed so far and given what it currently offers. So we’ll have to see what kind of cathedral it will be: the Chartes cathedral (a very nice one indeed and impressively built in 25 years) or the Sagrada Familia in Barcelona, a flamboyant hodgepodge of design from different eras but mainly under Gaudi influence, under construction since 1885 and currently (if donations allow) planned to be finished in the first 1/3 of the 21th century, give or take a few years. Of course, it can always be worse: in the end the Cologne cathedral took 600 years to complete, but let’s start optimistically. Everybody knows that very complex and highly political IT projects never suffer delays.

Another option is that the cathedral does not even get built any time soon, or not in this design, because it is becoming more and more likely by the week that the Greek presidency will not complete the revision dossier before the elections. And we’ll only have to see what Eudamed 3.0 will look like when the regulations get back into the legislative process in some shape or form after the elections.